At the time of formation, the StrAU has no its own management structures. Formation of the StrAU is planned on the basis of interdisciplinary integration of the KFU’s units, forming temporary creative focus groups, the interaction of existing administrative structures at the university and institutions level. Also external domestic and international organizations partner, invited experts and scholars participate in the formation of the StrAU. Schedule of positions and salaries of the StrAU prior its formation is absent; as the StrAU members are staff members of various units of the KFU and management structures. Service interaction provided their coordinated activity in the preparation of Passport of StrAU. 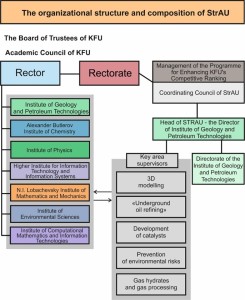 StrAU is formed with matrix approach through transformation, restructuring and administrative reassignment of duties of the acting research and academic structural units within the established priority areas of KFU’s development, as defined at the first stage of “Road Map” of Program for Enhancing KFU’s Competitive Ranking (2013-2020.).

StrAU is formed on the basis of priority area “Oil Production, Refining and Petrochemistry”.

Principal levels of management: the Rector – the Leader of StrAU – managers of StrAU projects.

Interaction of the main organizational units:

Directorate of the Program for Enhancing KFU’s Competitive Ranking reviews implementation of StrAU Road Map quarterly; if necessary, makes amendments to its budget and target indicators.

Thus, in the framework of implementation of the Road map of the StrAU, its leader  and the collegial body have exceptional financial and organizational powers in key decisions.

The role and the expected format of interaction of organizational units.

Types of principal organizational units in the management structure (departments, research and academic centres, academic programs, etc.). The basic institute currently consists of two Centres of Excellence and eight laboratories together with the Institute of Geology and Petroleum Technologies:

In addition, Calendar plan of the StrAU involves creating new structural elements of the StrAU (research centres, departments), as well as the management team of international activities and information support of activities of the StrAU.

The total number of staff employees of the backbone institute, involved in the StrAU is 200 FTE, including faculty – 74 wages, scientists – 82 FTE, scientific and supporting staff – 35 FTE, administrative and managerial staff – 9 FTE.

List of KFU units involved in the StrAU as the consortium members, but not included in its organizational structure

In the frame of the consortium (without a direct inclusion into organizational structure of the base institute) , the following KFU  units will be involved in the StrAU:

The total number of the StrAU’s is 310 FTE (280 employees). The main role of the backbone institute of the StrAU is to coordinate the activity of all departments and agencies, included in the StrAU. Interaction with other units of the consortium will be built through a system of governing board and executive management of the StrAU.